Figure 1 shows the average cost of worker compensation claims per employee per year paid in 24/7 industrial and transportation operations with levels of employee fatigue ranking from low to high.1 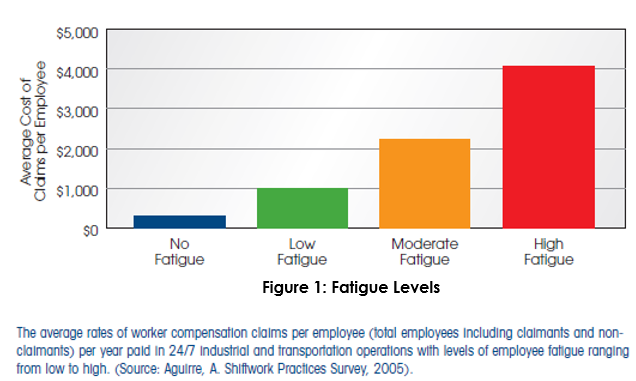 2. Prolonged wakefulness compared to alcohol use: effects on alertness

Sustained wakefulness has been found to produce lapses in behavioral functioning that are comparable to alcohol intoxication.

One study found that after 22 hours of sustained wakefulness, participants’ performance on tests such as reaction time, reasoning ability, and task accuracy were comparable to performance with a blood alcohol content of 0.08% (Figure 2).2

Authors concluded that the study results suggested that “moderate levels of fatigue produce performance equivalent to or greater than those observed at levels of alcohol intoxication deemed unacceptable when driving, working and/or operating dangerous equipment”.2

Figure 2. Prolonged wakefulness compared to alcohol use: effects on alertness2

A person’s “circadian profile” tends to affect his or her ability to adapt to shiftwork. Three main characteristics of circadian profiles have been extensively evaluated: morningness/eveningness, flexibility of sleeping habits, and one’s ability to overcome drowsiness. Both flexibility of sleep habits and ability to overcome drowsiness are associated with better long term adaptation to shiftwork.4

Based on results from the Health & Work Performance Questionnaire (HPQ) – sleep disorders, depression, and fatigue are the three biggest contributors to lost work time (Figure 5).5 The HPQ is an employee self-report tool that assesses 29 chronic health conditions and includes questions related to accidents, injuries, and work performance.

Lost work time in this study included both absenteeism and presenteeism – which is defined as time spent at work focusing on non-work-related tasks. Results from this cross-sectional survey of health and productivity are based on 1,147 U.S. Department of Energy (DOE) employees at two DOE national laboratories.

Is fatigue impacting your workforce?

It can be challenging to determine if fatigue is negatively impacting your workforce. Some tell-tale signs of worker fatigue issues can include:

To learn more about fatigue and its impact on 24/7 operations, download our FREE white paper:

The Myths & Realities of Fatigue

Reducing the Costs, Risks, and Liabilities of Fatigue in 24-Hour Operations

CIRCADIAN® is the global leader in providing 24/7 workforce performance and safety solutions for businesses that operate around the clock. Through a unique combination of consulting expertise, research and technology, software tools and informative publications, CIRCADIAN helps organizations in the 24-hour economy optimize employee performance and reduce the inherent risks and costs of their extended hours operations.

More in this category: « Shiftwork Adaptation: Morningness vs Eveningness Managing an Aging Workforce »
back to top